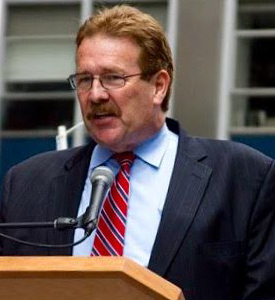 James Lafferty is Executive Director of Christian Seniors Association (CSA), founded in 2007 to represent and unite Christians aged 50 and over in the cause of religious liberty. What's more, CSA is recognized as a leader in educating, mobilizing and turning out Christian senior voters. More lately, CSA has taken a lead role in organizing Christian seniors to defend President Trump against his enemies in the mainstream media, the radical Left and among Washington's Republican establishment.

Jim came to Washington to serve as Director of Legal Information for the National Right to Work Legal Foundation in Virginia. He later served as Press Secretary and Communications Director to former House Majority Whip Tom DeLay.

Long active in the fight to secure America's Judeo-Christian heritage, Jim is also chairman and founder of the Virginia Anti-Shariah Task Force, a community-based grassroots network in opposition to the expansion of radical Islam across America.

Moreover, Jim serves on the board of Pamela Geller's Stop the Islamization of America (SIOA). He regularly speaks at SIOA events including rallies at the Ground Zero site of the 9/11 Islamic terrorist attacks in New York as well as at regular media forums on radical Islam. Ms. Geller included several accounts of Jim's successful grassroots campaigns in her bestselling book Stop the Islamization of America – A Practical Guide to the Resistance.

Mr. Lafferty has assisted grassroots opposition to efforts by the Muslim Brotherhood front group Council on American-Islamic Relations (CAIR) and by former President Obama's Department of Justice to strong-arm local governments to approve plans for mosques even though they fail to conform with lawful zoning requirements. He has testified at zoning and planning commission hearings in the Virginia counties of Fairfax, Loudoun and Henrico and in Murfreesboro, Tennessee. Jim's role extends to advising citizen groups opposed to mosque construction elsewhere in California, Pennsylvania, New Jersey and New York.

CAIR in 2010 published a report on so-called hate crimes and Islamophobia, which attacked most of the prominent leaders of the anti-Shariah movement. As a signal of its contempt for Jim and his effective leadership against the spread of radical Islam in America, CAIR put his picture on the cover of this document. In addition to its role as a Muslim Brotherhood "front," CAIR is an affiliate of the terrorist group HAMAS and was identified by federal authorities as an unindicted co-conspirator in the Holy Land Foundation terrorism money-laundering case.

Mr. Lafferty has appeared on Sean Hannity and Glenn Beck's television show and is a regular guest on conservative talk radio shows. He has also addressed the Liberty University law school as well as numerous churches and synagogues.

Jim is a U.S. Navy veteran and was appointed by President Ronald Reagan to top positions during both terms of the Reagan presidency. He has worked in high-level staff positions in both the Senate and the House including service on the House leadership staff. Jim lives in northern Virginia with his wife Andrea and their son.